Barcelona boasts a climate, cuisine and culture which has resulted in it becoming a popular destination for human migration. In 2014 Spain’s second city accommodated 7.8 million tourists, in contrast to it’s mere 1.63 million inhabitants. Of its inhabitants 17% are foreigners and arrived in Barcelona via human migration.

Human migration is the movement of people from one place to another with the intent of settling temporarily or permanently. It is universal. Thus like many socio-cultural concepts human migration has become riddled with hierarchal definitions. As a TEFL teacher born in England I contribute to the 17% of foreigners in Barcelona. I come from a western society and my profession is a fairly affluent white dominated one, thus I am referred to as an expat. However, other members of the minority groups that contribute to the 17% are often referred to as immigrants. Why? Why does the term expat conjure images of a wide eyed individual keen to explore the unknown while immigrant has a defamatory association of intrusion? Expat glamour. Immigrant grit. The definition of the two terms in the Oxford Dictionary are strikingly similar.

Expat : A person who lives outside their native country

Immigrant : A person who comes to live permanently in a foreign country

So what is the difference? A Wall Street Journal blog entitled ‘Who’s an expat anyway?’ concludes that the difference ‘depends on social class, country of origin and economic status’.Who is deemed appropriate for either term is often lead by social prejudice and xenophobia. The use of different terms to differentiate between people who are in essence doing the exact same thing only promotes segregation and unequal opportunity. Barcelona is a city characterised by its cosmopolitan nature, however in paradox there still exists ethnic minority segregation in regards to professional and social opportunity.

In the second instalment

of the series entitled ‘Exploring Opportunity’ I interview people from minority groups to see the opportunity they have to integrate in Barcelona, one of the most visited countries in Europe.

“I have to be a problem for society and not myself”

, something in his hand caught my eye. He was holding a Brunch Electronik cup. Brunch Electronik is a  fortnightly music festival on Sundays in the city, notorious for excessive alcohol and drug  consumption. When I saw him holding the cup and begging for money the stark contrast between the necessities to survive and excess was overwhelming. This man from Italy has lived in Barcelona for five years and has been homeless for one year and a half after he lost his job in the aftermath of the financial crisis in Spain. When I asked him if the government were doing anything to help improve his situation he replied ‘I have to be a problem for society and not myself for the government to help me’. I asked him to elaborate. He concluded that you have to be perceived as a disruptive threat to the community such as a drunk, thief or drug addict. This man is none of the aforementioned.  He has a broad skill set and is trilingual yet unemployable. He informed me he does not have the necessary legal documents or the network to support himself – no friends or family in the country, no job and no home.

–“Where do you find the rubbish?”

I met this man from Senegal close to the Arc de Triomf in El Born. Originally he had a textile job but now he works collecting scrap metal from the streets which he sells to a vendor. On average he makes between 20-25€ for over ten hours work each day. I asked him if he has the necessary legal documents and he said yes. So I asked why if he has the theoretical opportunity of getting a professional job why doesn’t he? He replied “es mejor tener un trabajo que no tiene un trabajo”- ‘it is better to have a job than not have a job’. Does this mean that despite him having the documents, opportunity for him to find work is limited. If so why? 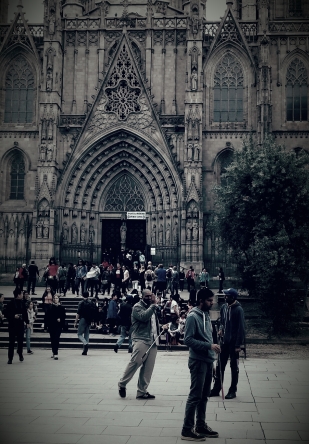 Outside the famous Catedral de Barcelona in the Gothic Quarter I talked to a young man from Pakistan who moved here upon advice that in Barcelona there is more work than in his native country. In fact, in 2012 it was reported that Barcelona has the highest Pakistani population in any city in Europe outside the UK. Many people from Pakistan work in service markets like internet cafes, fast food and mini markets but also in the archetypical tourist hotspots in black market trade

. Perhaps it is a testament to the instant gratification absorbent times we live in that selling selfie sticks has now become more profitable than selling beer to drunken tourists. This young man lives with six of his work colleagues in El Raval in a two bedroom flat. I asked him what are the opportunities for him to get a professional job and he said none because he hasn’t got the necessary legal documents. Documents, or lack thereof  seem to be a recurring theme. 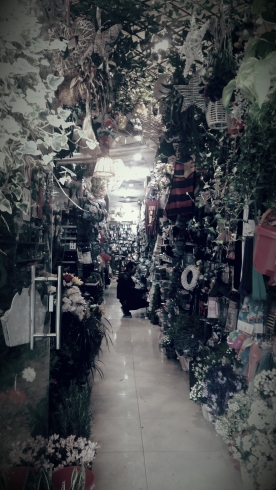 “Podemos hablar sobre tu vida en España?” – “Can we talk about your life in  Spain?”

In 2013 Dan Bileksy wrote an article for the New York times entitled ‘Spain’s Chinese Immigrants Thrive in Tough Economy’. While many businesses in Spain crumbled during the  financial crisis, Chinese businesses particularly the ‘Bazar’ shops have continued to prosper. These shops are slightly haphazard in nature and self almost everything and anything and are permitted to stay open for extended hours because according to a Catalan student “they provide the community with a service others can’t or don’t want to provide”. She added  that she thought this in unfair as many smaller business don’t profit from this advantage. There is a hint of resentment in her tone. The success of Chinese businesses Bileksy attributes to ‘intense labor and a strong Confucian model of family loyalty’. This loyalty was demonstrated when I attempted to conduct interviews in numerous Bazar shops. On each occasion dialogue was limited. I asked one Chinese man if he could tell me about his life in Spain, he replied “no digo eso” – “I do not talk about that”. I asked another shop employee if she enjoyed working there she merely said “no lo se”- I don’t know”.

On Plaça de Sant Agustí close to the world renown La Boqueria I saw a group of homeless people sleeping in a doorway being reprimanded by the police. When the police left I approached them and asked them their story. They told me they moved to Barcelona “hace mucho tiempo” – “a long time ago”. All of their possessions were littered around them and an elderly woman was drinking from a large bottle of beer. They told me that the police don’t understand the poor, the homeless or the jobless. Then one man snarled “hijos de putas” – “son’s of bitches”. There is a history of disharmony between the Romanian community and Barcelona law enforcement. It stems back to 2010 when the then mayor was brought to court on charges of using inflammatory language after promoting a pamphlet which read “We don’t want Romania’s”.

Arrels Fundacio, a charitable organisation for the homeless, defines homelessness as those who live in any ‘undignified housing’.  It claims 3,000 people sleep on the streets of Barcelona and 30 million without dignified housing across the European Union. It is one of the commendable organisations that is striving to achieve what the Barcelona Municipal Immigration Council had promised to deliver in Article 9.2 of the Spanish Constitution of public powers “to produce the necessary conditions to ensure that the freedoms and equality of the people… and to facilitate citizen integration in the political, economic, cultural and social aspects of public life.”

So why does segregation still exist despite the declaration to provide ‘freedom and equality’ and ‘facilitate citizen integration’. The common factor in a lot of these cases seemed to be a lack legal documents and employment. The two are directly related to each other. In Barcelona it is notoriously complicated to get official documentation called a ‘NIE’. In Spain it is mandatory to have a NIE to do a number of things integral to facilitate integration in the community including:

Furthermore, to actually be able get a NIE and do all of the above, you first to need to have proof you live at a permanent address called ‘Certificado de Empadronamiento’ and also proof of having a contracted job offer. This makes the process extremely difficult, when to get the NIE to integrate better into society, you already need to be integrated to some extent by having an address and job offer.

All of the above cases differ slightly, yet we all share something in common; that we moved to Barcelona via migration. The only difference is my circumstances meant I already had a network and thus opportunity to obtain documentation and social integration was easier. If they are immigrants then so am I. If I am an expat then so are they.

If you are reading this and need help with the process of obtaining a NIE to find legal work please follow these links:

2 thoughts on “The Hypocrisy of Human Migration”

Impossible to ignore. A homeless person sleeping in front of one of Spain’s most profitable banks.

‘You need English’. Advertising emblazoned across the wall of a TEFL school in Barcelona. 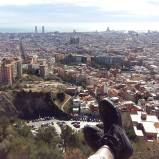 View of Barcelona from the Bunkers of El Carmel. Opportunity to see and travel the world is at the feet of many TEFL teachers.
Follow Exploring Opportunity on WordPress.com
Loading Comments...
%d bloggers like this: